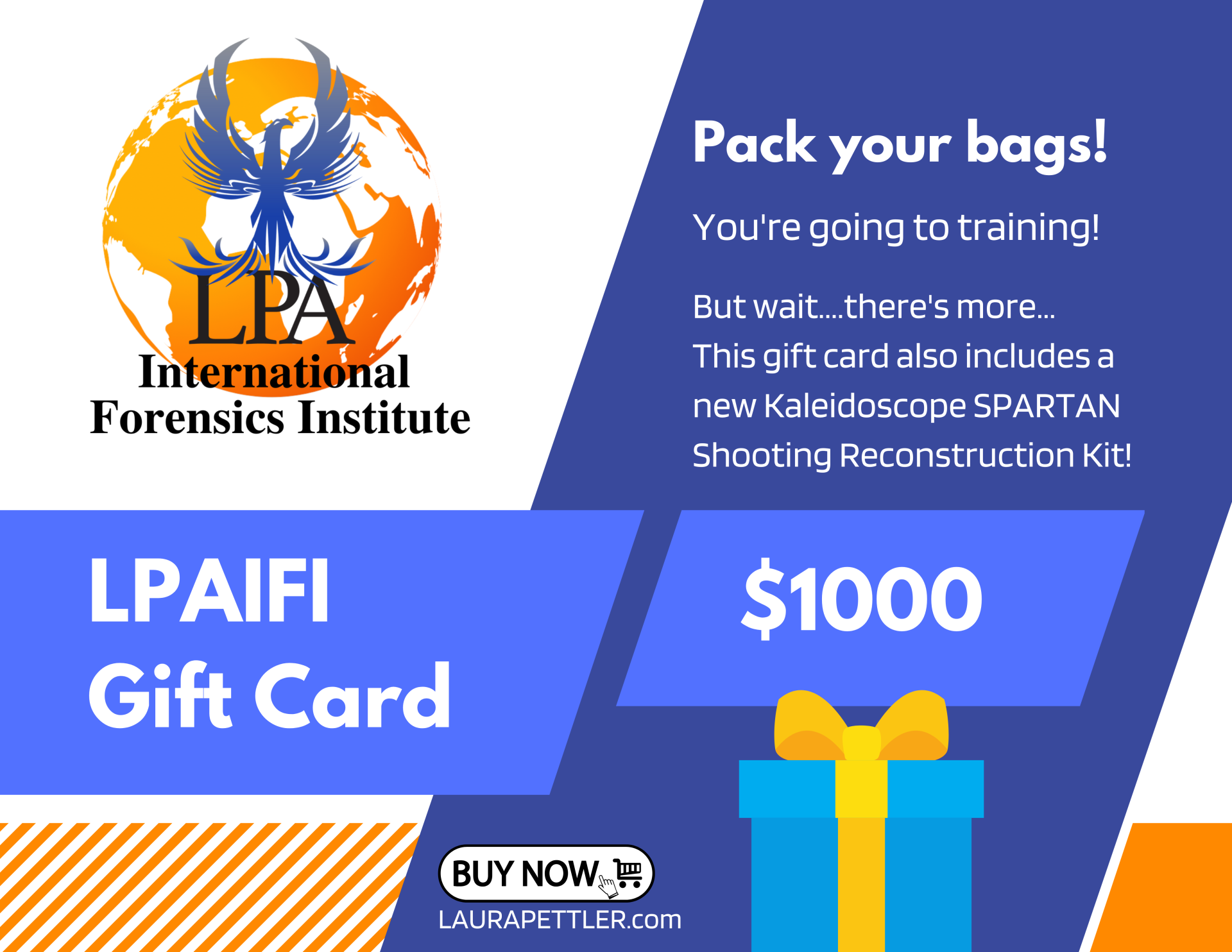 GIVE THE GIFT OF EDUCATION

The LPAIFI Gift Card is the educational gift that keeps on giving! Buy today for your special CSI !
BUY LPAIFI GIFT CARD

This course is designed to train and certify users of Dr. Pettler's Kaleidoscope Laser Reconstruction System in accurate and effective use and application of the kits for shooting incident documentation and reconstruction. Although shooting incidents are one of the most common types of scenes crime scene investigators encounter, many CSIs and detectives are unaware of the necessary steps required to accurately document and/or process shooting incident scenes and their associated bloodstain evidence towards creating a permanent record of the incident. This shooting reconstruction course teaches concepts of shooting incident documentation and reconstruction using Dr. Pettler's Kaleidoscope Laser Reconstruction Kit. Certification requires successful completion of both written and hands-on-application examination on the last day of the course. Kaleidoscope users who are planning to bring their kits with them to train on, please contact us at info@lpateam.com to enroll for a reduced price.

About former President of the Association for Crime Scene Reconstruction Douglas Young: Doug began his law enforcement career with the Gibson County Sheriff’s Department in Southwestern Indiana. While working at the Sheriff’s Office, Doug attended Vincennes University where he majored in Law Enforcement/Criminalistics, graduating Cum Laude. Doug began training as a crime scene technician for the Gibson County Sheriff’s Department and held that position from 1993 – 1998. In December of 1998, Doug moved to Texas and took a job with the Austin Texas Police Department as a Sr. Crime Scene Specialist. While in Texas, Doug became certified as a Crime Scene Investigator through the International Association for Identification.

In November of 2002, Doug took the position of Chief of Police with the Oakland City Police Department in Indiana, where he served until May 2007. That same month, Doug moved to Thornton, Colorado where he accepted a position as a Crime Scene Investigator with the Thornton Police Department Crime Lab. In August 2009, Doug was promoted to Sr. Criminalist and continues to serve in this capacity.

Doug has lectured both domestically and internationally on various forensic topics to include Crime Scene Investigation, Forensic Entomology, Bloodstain Pattern Analysis, Shooting Incident Reconstruction and Crime Scene Reconstruction. Doug has been qualified as an expert witness in both Federal and State Courts.

Doug is a member of Laura Pettler & Associates elite roundtable of world-renowned forensic experts that boasts a 98% solve rate using Pettler’s Murder Room death investigation method. Doug is a past President of both the Indiana and Rocky Mountain Division of the International Association for Identification and is still an active member of both the parent body IAI and the Rocky Mountain Division. Doug served as the Regional Representative for the RMDIAI until 2019. Doug is a member of the Association for Crime Scene Reconstruction (ACSR) and has held the positions of board member, President- Elect, President and currently is serving and Chairman of the Board of Directors for this organization. Doug is the Vice-Chair of the Crime Scene Consensus Body for the American Academy of Forensic Science Standards Board.

Doug is the founder of the Colorado Forensic Investigators Group (COFIG) and is the owner of Triad Forensics LLC, a forensic training and consulting company located in Longmont, CO.

Select a course first to display its contents.

No available contents for

There are no free, paid or coming soon courses in your school yet.
Why don't you create one?

The school owner is working hard preparing the courses for you.

Oops, you haven't created any courses yet.

Wouldn't it be a good idea to create a course?

No blog posts found in your blog. Why don't you create one?